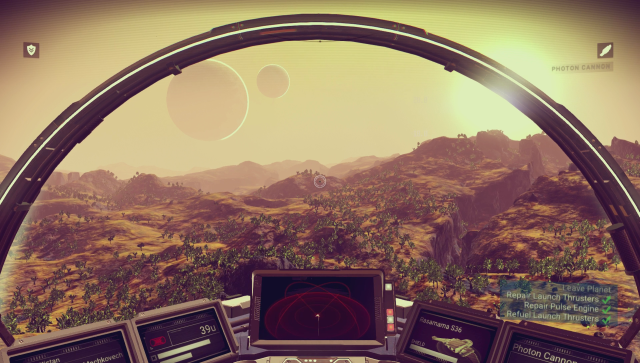 Yesterday, two people expected that they’d be able to see each other when they met up, against all odds, in No Man’s Sky‘s massive, virtual galaxy of 18 quintillion planets. But in spite of confirming that they were in each others’ line of sight (by communicating outside of the game), neither player could see the other. They were alone, even though they were both standing next to each other on the exact same planet orbiting the exact same star. In No Man’s Sky, you’re always alone.

These two players had good reason to expect their interstellar meetup would work—Hello Games Managing Director Sean Murray has promised that kind of limited multiplayer interaction numerous times in the last two-and-a-half years. (Follow-up tweets from Murray early this morning confirm he never expected this to happen so quickly and suggest that server overload might be to blame for the missed multiplayer connection).

At the same time, if you’re actually trying to find another person in the vast, uncaring cosmos of No Man’s Sky, you’ve probably misaligned your expectations for what the game is actually supposed to be about. That’s partly the fault of Hello Games, but it’s also partly the fault of a player- and press-driven hype machine that quickly spiraled out of the developer’s control.

Not the game you imagined

"So what do you actually do in No Man’s Sky?" It’s a question that has been asked incessantly since the massive-scale, procedurally generated space exploration game first debuted via a trailer at VGX in late 2013. It’s also a question that Murray and the team at Hello Games have been answering that entire time, first with reluctant vagueness and more recently with increasing specificity. It’s a question that Internet comment threads and journalists have done their best to answer, too. It’s a question that, if you were actually looking, wasn’t all that hard to find an answer to.

But it’s also a question that’s about more than just the actual answer. After years of hype-filled coverage and early trailers, No Man’s Sky has become a sort of wish-fulfillment engine for everything potential players might want to project onto its massive galaxy. At least one over-the-top Redditor described the then-unreleased game as "the true endgame for me, the final frontier, the last game I’ll ever need or desire." Those… are some pretty high expectations, dude!

Vice’s Austin Walker summed up the unsustainable hype embodied in that comment as "this vague feeling of possibility around No Man’s Sky [that] has been its greatest strength in finding fans, but also alienated people who want more specific answers about the game’s structure and goals." Rock Paper Shotgun noted that No Man’s Sky‘s release ends its status as "a horizon-dwelling object of pure imagination." More cynical industry watchers have compared it to the likes of Spore and Black & White, which ultimately fell short of their lofty, practically unattainable levels of hype.

Murray himself seems to have realized that despite all the interviews and trailers trying to explain things, the hype for No Man’s Sky got away from him a little bit. In a pre-launch post about the game on Monday, Murray clearly and concisely laid out the four key pieces of No Man’s Sky‘s gameplay loop: exploring, trading with NPCs, combat, and survival/crafting. He also acknowledged, however, that the game exists in quite another form in many potential players’ heads.

"That means this maybe isn’t the game you *imagined* from those trailers. If you hoped for things like PvP multiplayer or city building, piloting freighters, or building civilisations… that isn’t what NMS is. Over time it might become some of those things through updates. For instance, freighters and building bases *are* coming!… At launch though, it’s an infinite procedural sci-fi-space-survival-sandbox unlike anything you have ever played before" [emphasis added]

This is a somewhat incredible statement from the developer of a heavily marketed, highly anticipated game on the eve of its launch. For most games, after years of trailers and interviews and hands-on demos, the potential audience should have a precise idea of exactly what to expect going in. With No Man’s Sky, Murray admits that all that hype has actually led some players to expect features that don’t actually exist.

Filling in the gaps

In some ways, Hello Games is responsible for letting this kind of hopeful wish-projection flourish. Murray’s early interviews about No Man’s Sky could be cringe-inducingly vague regarding most everything about the game (except for its procedural universe generation). This left a vacuum of details that potential players and industry watchers struggled to fill with potential based on what they know from existing games.

You can almost hear the thought process that may have sprung from a confused, casual fan who caught the trailers or initial interviews for the game. Oh, there are huge space freighters and smaller fighters… so it’s going to be a massively multiplayer resource gathering/space battling simulation like Eve Online, right? I hear there’s shooting on a vast galaxy of planets… so it’s going to be just like Destiny, right? The developer talked about crafting… that sounds like Minecraft… which means you can probably build whole cities on these planets, right? Cool!

In a Rock Paper Shotgun interview from last year, Murray himself noted how much early players and journalists seemed to layer their own expectations onto the game’s gaps during the pre-release period. "It’s really funny talking to people who have maybe come into the office from the community and things like that or that we had in playing the game or journalists and stuff, and they will always have this one feature and they’re almost angry, like ‘Why can’t I do X?’" he said.

In the last year or so, Murray and Hello Games firmed things up a bit, laying out some more concrete gameplay details through interviews and hands-off and hands-on gameplay demos. By that point, though, many casual observers had already cemented their own image of No Man’s Sky by filling in the previous holes in the public descriptions of the nebulous game. They had erected a perfect pedestal on which the galaxy simulation could sit, ready to fulfill their every gaming desire.

When Murray and Hello Games (as well as console publisher Sony) actually did show and talk about No Man’s Sky, though, they were actually relatively restrained and realistic about what they were promising. Unlike Spore and Black and White—both of which saw saturation PR campaigns that promised revolutionary and industry-changing gameplay features that mostly didn’t end up working out—it’s hard to find many concrete promises made by No Man’s Sky‘s developer and publisher that haven’t ended up being true (with the possible exception of the multiplayer issue discussed above).

Far from a Peter Molyneux-like figure promising a life-changing gaming experience, this early Game Informer interview with Murray shows a man who’s proud of his game but also wracked with doubt and humility about the project. "I think I didn’t anticipate people being really into it," Murray admits sheepishly at one point. "Every few months… I’ll suddenly go ‘Oh my god, what are we making,’ in both a good and a bad way, right?’"

That restraint lasted right up through Monday’s blog post, in which Murray describes No Man’s Sky merely as "a weird game… a niche game and… a very very chill game… This game might not be for everyone, I expect it to be super divisive…" And while Stephen Colbert used words like "quantum leap" and literally compared Murray to God in a Late Show interview last year, Murray himself seemed practically embarrassed by all the attention his little game was getting during the sit down (even as he’s also obviously proud of what his team has accomplished).

Last July, Murray went in-depth with Rock Paper Shotgun on his struggles to hold back the unexpected and ridiculous levels of hype that emerged from that first VGX trailer and his efforts to replace it with what RPS calls "excited realism" about the game:

When you put together the trailer, you want the world to be excited about your game and you think it’s going to go down so well… The reality for most developers any time you talk to them is disappointment when [the trailer] comes out and an acceptance after. But No Man’s Sky? You wanted that and then it achieved it and you’re like ‘I don’t know what to do now!’ We launched at this trajectory—it’s like the team are on a rocket and they’re trying to build the rocket as it’s launching into space.

As I’ve started playing No Man’s Sky, I’ve found it interesting to imagine a world in which the game was launched Minecraft-style—as a unique, hard-to-characterize title from a small, largely unknown developer that hit without much initial fanfare. It’s easy to imagine that version of No Man’s Sky being regarded as a hidden gem, growing slowly via word of mouth to become an unexpected summer hit with unheard of breadth and tons of intriguing surprises for those willing to explore its depths.

After two-and-a-half years of intense pre-release attention, though, that version of No Man’s Sky can no longer exist. All many players will be able to see now is how No Man’s Sky compares to the nonexistent (and largely never-even-directly-promised) game that they had pictured in their heads. That’s a shame, because for all the things that No Man’s Sky actually is, it could never actually live up to the things you might imagine it might be.

What to Do If You Start Choking When You’re Alone

In private dealings, Trump lies constantly and without apparent purpose