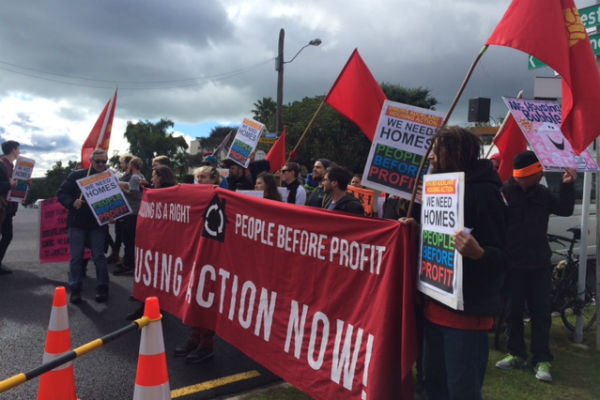 People were queuing as early as 5am on Saturday morning to get a glimpse inside the freshly renovated properties from TV3’s The Block NZ.

However, the excitement of the open homes was interrupted by protesters hoping to highlight the current housing crisis in Auckland.

Protest organiser Ben Peterson said "it’s fine to watch The Block and to see nice homes being built but everyone should feel good going home and be able to renovate their own homes, and when so many people are being locked out of housing and living in garaging then that’s not the case."

The four homes will go to auction on TV3 later this month; and with the average home in the area worth over $1 million, these properties are set to sell for a high price.

If protesters had their way, the Prime Minister would put a bid in.

"As a symbolic gesture it’d be really great if John Key got in touch and bought The Block and turned it into state housing," Mr Peterson said.

Despite the protest and the weather, the open homes proved a popular event with a long line of eager fans and traffic backed up.

Producers of The Block NZ are yet to comment on the protest.